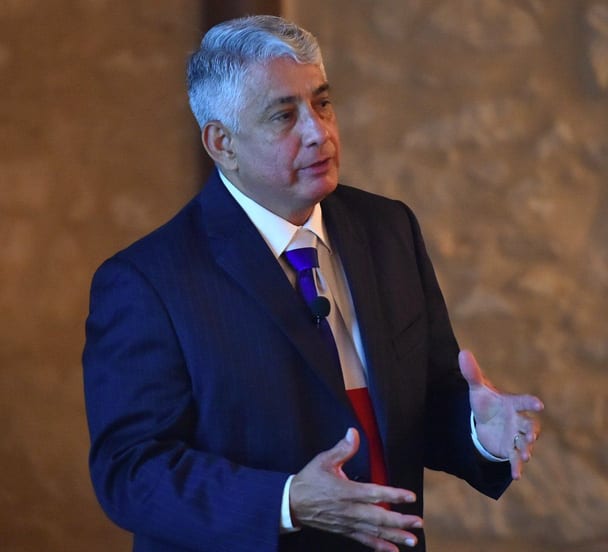 Reynaldo (Rey) Chavez is the President/CEO of the San Antonio Manufacturers Association (SAMA).  He is responsible for the proper administration of all affairs of the association.  He also manages and directs all activities of SAMA and is responsible to the Board of Directors; advocates for manufacturers and maintains effective relationships with other organizations, both public and private; and sees that the positions of the association are enhanced in accordance with SAMA policies.

Rey is originally from San Antonio, TX, he received his BS in Physical Education and Health, and his commission as a Second Lieutenant in the United States Air Force, from Angelo State University, San Angelo, TX, in 1978.  He also received his MS in International Relations from Troy State University, Troy, AL, (European Division) in 1990.

As a senior military officer, Rey served in numerous leadership positions to include command of diverse organizations, employees, and resources in excess of $1.5B throughout the United States and Europe.  His last Air Force assignment was with Headquarters, Air Education and Training Command, Randolph AFB, Texas.  He was the Deputy Chief and Chief of Operations, Technical Training Division, and was responsible for the management of basic military and technical training at five training centers, graduating 225,000 students yearly for the US Military.

After retiring from the United States Air Force in 2004, Rey worked with the Schertz, Cibolo, Universal City Independent School District as an adjunct instructor.  In 2007, he joined Carneiro, Chumney & Co., a certified public accounting firm in San Antonio, as the Chief Operating Officer and Firm Administrator.

Rey currently lives in Schertz, TX, and has been involved with many regional Chambers of Commerce, Economic Development organizations, Workforce Solutions – Alamo, Universities and Colleges.  He is married to the former Ingrid Wessel of Roca, Nebraska, and they have two sons, Daniel and Andreas.

SAN ANTONIO MANUFACTURING
The manufacturing industry is one of the largest sectors of the San Antonio economy.

From furniture to food and beverage manufacturing, this sector is a major employer in the area.

If it can be made from petroleum, plastic, paper, or just about anything else, there’s a local manufacturer that does it.