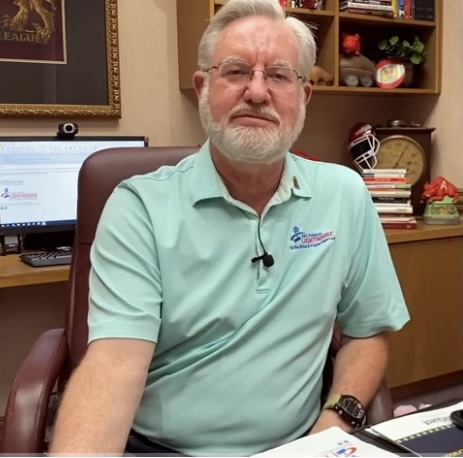 2020 provided many twists and turns for everyone….and the Lighthouse was no different. One of the biggest changes came when Mike Gilliam, CEO, announced his pending retirement in 2021. After more than 15 years at the helm, Mike announced early this year that he will be retiring next summer.

Much like the last year, Mike’s time at the Lighthouse has been filled with challenges and rewards. When he first took over as CEO in May of 2005, he was met with a faltering organization that was more than $18 million in debt and had collection agencies calling weekly. He was forced to let half of his direct reports go and laid off 20 individuals who were blind. This was a tough but critical decision since the mission of the Lighthouse is to empower blind and vision impaired, and one way we do that is through employment. But through patience, diligence, inspiration from the blind team members, and a little bit of luck, Mike led the Lighthouse to pay off all debt by 2011 and guarantee its existence for another 78 years (since it was founded in 1933).

Now, 15 years later, under Mike’s direction, the Lighthouse is not only debt free, but has become a leader in the community that is recognized locally, state-wide, and on a national platform. The Lighthouse has received many prestigious awards, some of which include Best Place to Work in San Antonio and in Texas, Top 50 Non Profits in the US, Board Members of the Year, Spirit of Giving, Most Ethical Large Business in SA, National Best Place to Work for People Over 50, and Fastest Growing Lighthouse in the Nation, just to name a few. And in his last full year at the Lighthouse, leading through a world-wide pandemic, the Lighthouse was able to support more than 60 San Antonio area nonprofits who were struggling and in need, while keeping its operations open every single day.

Mike recognizes his two most meaningful accomplishments at the Lighthouse were paying off the $18 million in debt, but also seeing programs and services grow from serving 600 blind individuals in 2005 to over 7,000 today. The impact the Lighthouse has had on the blind and vision impaired community is undeniable. Mike’s expectation for greatness has not only led the Lighthouse to be the leading one-stop-shop for all blind/visually impaired needs in South Texas, but across the state as well.

Also as CEO, Mike has built an exceptional Executive Leadership Team that has contributed to the success of the organizataion and he leaves behind a legacy of unprecedented leadership. Bob Buckley, VP of Manufacturing for the Lighthouse and SAMA former Board Chairman, had this to say regarding his time under Mike’s direction, “What I’ve appreciated most, over the many years of working with Mike, is his laissez-faire approach with his senior team; always there if we need him but otherwise empowers and trusts his executive team to lead their respective business units.” While serving as CEO, Mike has created a passion that remains for San Antonio to be nationally recognized as the “Best Place For Blind People To Live” in the U.S.

As his time here nears the end, Mike says what he will miss the most is all of the blind team members, who have taught him how to put life into true perspective and never take anything for granted. In his downtime, he is looking forward to reading the Lighthouse Newsletter and living vicariously through it. Mike will forever be known as the leader who changed the trajectory of the Lighthouse and solidified its place as one of the premier “blindness” organizations in the country. He will be greatly missed…and so will his costumes!

SAMA wishes Mike well on this next phase of his life!

SAN ANTONIO MANUFACTURING
The manufacturing industry is one of the largest sectors of the San Antonio economy.

From furniture to food and beverage manufacturing, this sector is a major employer in the area.

If it can be made from petroleum, plastic, paper, or just about anything else, there’s a local manufacturer that does it.